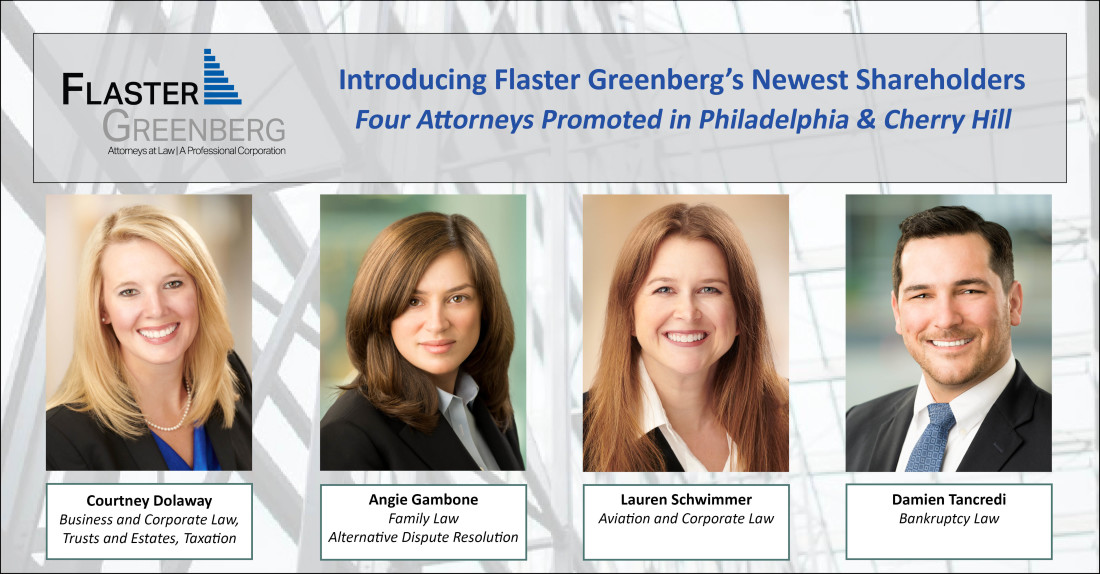 “Each of our newest shareholders has demonstrated outstanding leadership, exceptional knowledge and talent in his or her particular areas of law, and a firm commitment to providing excellent client service,” said Alan Zuckerman, Flaster Greenberg’s Managing Shareholder. “We are pleased to promote such a talented group of attorneys this year and are confident they will play an integral role in shaping the future of our firm’s culture. We happily recognize the entire group as the next generation of future leaders of our firm.”

Courtney E. Dolaway is a member of Flaster Greenberg’s Trusts & Estates, Taxation, and Business & Corporate Departments representing individuals and business owners in their estate plans and corporate planning. She concentrates her practice on estate planning, estate administration, business succession, and general corporate matters. In addition to her shareholder election, she has recently been named chair of the firm’s Women’s Initiative.

Licensed to practice law in Pennsylvania and New Jersey, along with the United States District Courts for the District of New Jersey and the Eastern and Middle Districts of Pennsylvania, Ms. Dolaway received her J.D. and LL.M. with a focus on estate planning from Villanova University Charles Widger Law School. Most recently, she was named a Pennsylvania “Rising Star” in the areas of Estate Planning & Probate by Pennsylvania Super Lawyers magazine and an “Awesome Attorney” in Trusts & Estates Law by South Jersey Magazine. Ms. Dolaway resides in the firm’s Philadelphia office.

As a member of the firm’s Family Law Department, Angie Gambone concentrates her practice in the areas of complex family law, divorce and custody matters. She also focuses her practice on adoption, family formation and the family law needs of nontraditional and LGBT families. Additionally, she is a member of Flaster Greenberg’s general litigation practice group, available to represent business entities and individuals in a wide range of commercial matters. She is active in the firm’s Diversity Committee, and is a trustee for the LGBT Rights Section of NJSBA.

Ms. Gambone received her J.D. from Rutgers University School of Law, cum laude, and is admitted to practice law in New Jersey and Pennsylvania. A certified divorce mediator, she has received numerous legal accolades throughout her career, including: named a "Legal Eagle" and "Person to Watch" by Philadelphia Magazine; a New Jersey “Rising Star” in the area of family law by New Jersey Super Lawyers magazine; named among the “Best LGBT Lawyers Under 40” in the United States by the National LGBT Bar Association; selected to the Annual Best Family Law Attorneys List by South Jersey Magazine; a “Top Attorney” by SJ Magazine; selected to the “New Leaders of the Bar” by the New Jersey Law Journal; among the “Top 20 under 40” by South Jersey Biz magazine; and honored with the American Academy of Matrimonial Attorneys, NJ Chapter Award for Excellence in Family Law. Ms. Gambone resides in the firm’s Cherry Hill office.

Lauren N. Schwimmer is a member of Flaster Greenberg’s Business and Corporate Department and the firm's Aviation Industry Group. She represents corporations, airports, individuals and financial institutions in a wide variety of matters. She has additional experience in the areas of aviation law, commercial and general civil litigation, banking law, and bankruptcy. She is active in the firm’s Women’s Initiative.

Damien Nicholas Tancredi is a member of Flaster Greenberg's Bankruptcy, Financial Restructuring and Risk Management Department focusing his practice on bankruptcy, specifically representing unsecured creditors and creditors’ committees, chapter 7 trustees and chapter 11 debtors. He also represents businesses in commercial litigation and corporate matters in Delaware, Philadelphia and South Jersey. He is admitted to practice law in Pennsylvania, Delaware and New Jersey as well as the United States District Court for the districts of Eastern Pennsylvania, Delaware, and New Jersey.