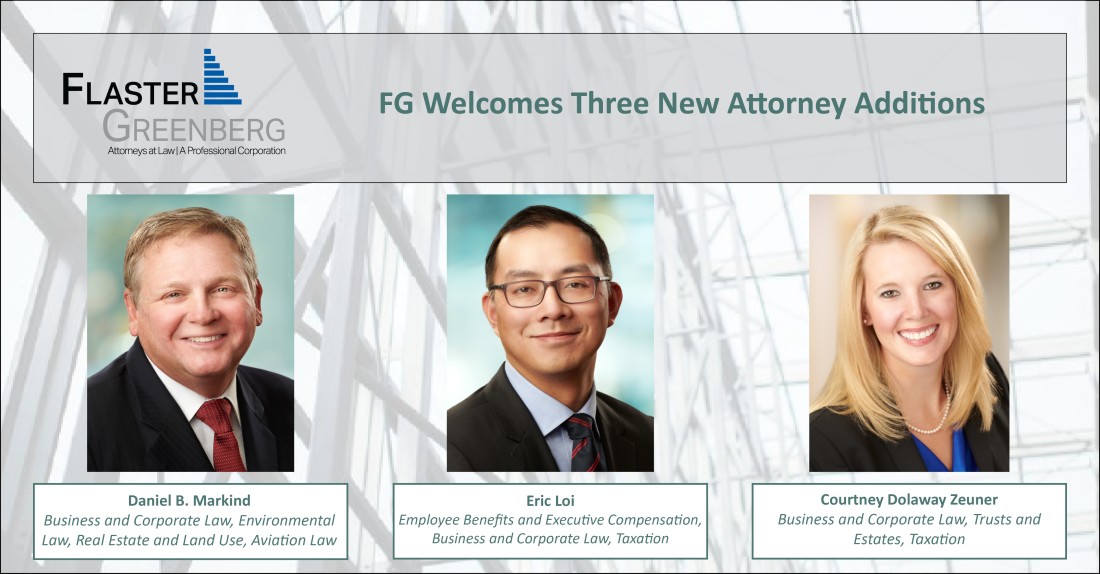 “Flaster Greenberg is excited to begin Q4 by welcoming three new attorneys,” said Alan Zuckerman, Managing Shareholder of Flaster Greenberg. “Dan Markind has built an impressive aviation practice and is a nationally recognized real estate and corporate attorney. All three of our new hires will make a fantastic addition to our growing law firm.”

Daniel Markind’s real estate and corporate practice has focused on representing some of the largest companies in the United States in sophisticated purchase, sale, financing, leasing, zoning and land use, workout and development matters. He also has helped form numerous start-up and smaller entities and has assisted in their growth. Over the past decade, Markind has developed a sub-specialty in energy law, including solar and wind energy, and oil and gas development and leasing. He speaks widely on Marcellus Shale and other mineral extraction issues and represents numerous companies and individuals involved in different capacities related to natural gas and oil leasing, production, transmission and waste disposal.

Markind also brings with him a national aviation law practice, adding Flaster Greenberg to a short list of nearly a dozen full-service firms that handle aviation law in the United States. He represents airports in litigation against the Transportation Security Administration, in business matters for the purpose of growing the business at their airports, and with regard to the energy assets at their airports. In addition, he represents companies that seek to assist airlines in establishing their business model, that seek to make airports safer and that seek to transact business at airports.

Former General Counsel of the Philadelphia International Airport, Markind currently serves as outside general counsel and outside specialty counsel to numerous airports. He is recognized as one of the nation’s foremost authorities on the relationship of aviation law to mineral extraction law.

Eric Loi joins us as a member of the firm’s Business & Corporate, Employee Benefits and Executive Compensation and Taxation Departments. Focusing his practice in tax and areas related to employee benefits and executive compensation, he advises corporate, non-profit, and governmental employers on issues relating to the design, administration, and compliance of qualified and non-qualified retirement plans and health and welfare plans.

Most recently, Loi worked an as associate at Norris McLaughlin & Marcus, P.A. Prior to entering private practice, he worked for a large national accounting firm where he advised large multi-national companies and U.S. companies of all sizes and industries on compensation and employee benefit matters, as well as other general federal tax matters. Licensed to practice law in New Jersey, New York and the District of Columbia, Loi received his J.D. from the University of Buffalo Law School and his LL.M. in Tax from Georgetown University Law Center.

Courtney Dolaway Zeuner joins us as a member of the firm’s Trusts & Estates, Taxation and Business & Corporate Departments. She focuses her practice on estate planning, estate administration, business succession, and general corporate matters and represents individuals and business owners in their estate plans and corporate planning. Prior to joining the firm, she worked as senior associate at Baratta, Russell & Baratta, P.C.

Dolaway Zeuner is licensed to practice law in Pennsylvania and New Jersey, along with the United States District Courts for the District of New Jersey and the Eastern & Middle District of PA. She received her J.D. and LL.M. with a focus on estate planning from Villanova University Charles Widger Law School.