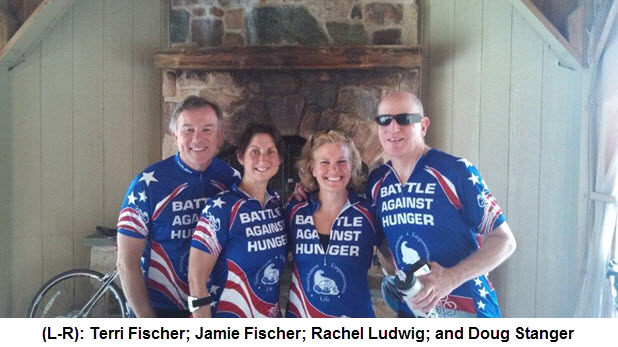 Flaster Greenberg shareholder Doug Stanger, along with Rachel Ludwig and Jamie and Terry Fischer, pictured above, participated in the 11th Annual Battle Against Hunger Bike Ride to raise awareness and funding for the Jewish Family Service (JFS) Food Pantry.

The ride, which was held September 6 – 8, 2013, was created to help generate public awareness about those who struggle with hunger, and provide funds to community organizations that assist those in need.

“As an avid cyclist, this is one of the only races that allows the riders to select the community organization which benefits,” said Doug Stanger, past president of Jewish Family Service. “Plus, 100 percent of all contributions go directly to charity.”

Stanger completed the 100-mile route for the second time. The foursome, who have previously completed Bike Rides benefiting the American Cancer Society and National MS Society, raised $2,500 for the JFS Food Pantry, which provides food to individuals and families in need.