Within the past few years, Gov. Chris Christie and acting Attorney General John Jay Hoffman  have alleged that physicians are responsible for the prescription drug abuse "epidemic." As a result, the state has taken steps to "crack down" on physicians who allegedly over-prescribe pain medication.

For example, the State Division of Consumer Affairs, Prescription Monitoring Program (PMP) was created in 2012 so that information is regularly submitted to a database which tracks all prescriptions for Controlled Dangerous Substances (CDS). Virtually all of the state's physicians have voluntarily enrolled in the PMP, and they check the database to determine whether their patients are obtaining prescriptions from other physicians. The PMP is now being used to determine whether a physician has prescribed CDS without medical justification.

The division has also created a Prescription Fraud Investigative Strike Team in its Enforcement Bureau, which is spearheading investigations of physicians "who illegally supply prescription drugs for profit." At the same time, the acting attorney general issued a directive to expand investigations into "corrupt" health-care professionals who operate "pill mills."

Accordingly, more physicians are now facing allegations from the Board of Medical Examiners (BME), which licenses physicians, that they have "indiscriminately" prescribed CDS. When a physician is investigated by the BME for this type of allegation, he or she should retain experienced counsel knowledgeable about the standards for prescribing CDS, the BME's laws and regulations and the positions advocated by acting attorney general through his or her deputy attorneys general who will prosecute the case.

In the past, the BME resolved most investigations through "informally" negotiated consent orders. In this environment, it is not unusual for a physician to be served with an order to show cause seeking the temporary suspension of his medical license for the indiscriminate prescribing of CDS. Representing a client in these cases involves complex analyses of the facts and the law—refuting charges of over-prescribing is challenging, particularly when the "facts" are contained in hand-written medical records which may not completely document the physician's rationale for prescribing the CDS.

What Is Indiscriminate Prescribing?

There are physicians who have engaged in unethical or unlawful behavior by "selling prescriptions" or falling prey to drug-seeking patients. Typically, a physician is investigated due to a complaint by a patient, pharmacist or employer.

Under the law, a physician has engaged in inappropriate prescribing if he or she has prescribed CDS "indiscriminately or without good cause" or where he or she should have known that the CDS "were to be used for unauthorized consumption or distribution." (Emphasis added.) See N.J.S.A. 45:1-21 (m). Failure to thoroughly document "good cause" for the CDS in the medical records now raises the presumption that the physician was negligent when he or she issued the prescriptions.

A physician must adhere to the BME's CDS and chronic-pain patient regulation, which requires a recognized medical indication for the CDS, the complete name of the CDS, the dosage, strength and quantity of the CDS, and the instructions as to the frequency of use. He or she must perform a history and physical, make a diagnosis, formulate a treatment plan and review, and at a minimum every three months, he or she must assess any new information and the patient's progress. See N.J.A.C. 13:35-7.6.

Unfortunately, a physician may have medical records that do not fully document the rationale for prescribing the CDS. Consequently, the BME may seek to discipline a physician for failing to maintain proper patient records, or even for gross malpractice, neglect or incompetence. See N.J.S.A. 45:1-21 (c), (d) and (h).

Why Physicians Are Viewed as Part of the Problem

The acting attorney general has stated that "New Jersey is fighting back against prescribers who contribute to America's drug epidemic, and working to protect the public should they ever again be reinstated to practice medicine in our state." This signals a significant shift in the state's policy makers' position from one that encourages physicians to affirmatively treat pain, to alleging that physicians are part of the prescription drug abuse problem.

Unlike the typical BME investigation where the complaint is shared with the physician, these high priority cases are referred directly to the bureau, which obtains data on a physician's prescribing patterns by subpoenaing pharmacy records and medical records, reviewing the PMP, sending in undercover investigators to pose as patients and inspecting physicians' offices.

Once the BME receives the bureau's investigative report, an expert issues a written report. The BME may then file an order to show cause seeking the temporary suspension of a physician's license if the investigation"palpably demonstrates a clear and imminent danger to the public health, safety and welfare."See N.J.S.A. 45:1-22.

It is worth noting that deputy attorneys general (DAG) from two separate sections work with the BME—the prosecuting and counseling sections. Under the Uniform Enforcement Act, the attorney general is empowered to act independently on behalf of the "public interest." As such, if the prosecuting DAG files an order to show cause seeking a temporary licensure suspension, the DAG does so with the BME's assent—although the position advanced may be "harsher" than the BME's. At an order to show cause hearing, the BME's position is represented by its attorney, a DAG from the counseling section.

Defending a Physician at a Temporary Suspension Hearing

A physician is found to be an "imminent danger" when the BME determines, by a preponderance of the evidence, that the physician has violated the law. There is an implicit presumption that the public interest is best served by prohibiting such a physician from practicing.

One option for counsel is to negotiate an interim order in which the physician voluntarily ceases practicing until there is a resolution. This permits counsel to evaluate the facts, mount a defense and enter into settlement negotiations.

Some physicians want to fight an order to show cause because they think that testifying about their "good character" or well-meaning intentions will be convincing. This is not a good course of action—physicians make damaging statements that will be difficult to refute later on. The short time frames also make it difficult to retain a credible, prepared defense expert.

Complaints about indiscriminate prescribing result in retrospective investigations into patient care. It is the responsibility of counsel to assure that retrospective investigations involve an analysis of the written records as well as evaluating the character, competence and credibility of the physician. Determining that a physician violated the law is not as clear cut as the state may allege.

Questions about whether the physician obtained pain management contracts, checked the PMP, requested random urine specimens, reviewed hospital records, recognized that patients could become physically dependent or engaged in drug-seeking behavior must also be explored. The patients' demographic and economic circumstances must be considered—uninsured or under-insured patients cannot readily access pain management specialists and other therapies.

Most Cases Are Resolved With an Order

Most attorneys will enter into settlement discussions with the prosecuting DAG. Virtually all BME cases are resolved with an order, although a physician is permitted to request a hearing before an administrative law judge (ALJ).

During the past few years, orders have included the revocation or lengthy suspension of physicians' licenses. Older cases indicate that the BME issued reprimands or imposed shorter periods of active suspension along with ordering the completion of record-keeping courses or limiting the types of CDS prescribed. This evidences a shift from the BME's role as an agency whose goal is to ensure that physicians are competent, to a body which imposes disciplinary actions to "punish" physicians. Remediating a physician's alleged deficiencies is not the prevailing concept.

In 2013, the BME entered into 90 orders, and in 2014 approximately 78 orders. Less than a dozen cases were heard by an ALJ in 2014. Perhaps that's not surprising. Recent ALJ decisions related to over-prescribing indicate evolving, tougher standards. For example, the Appellate Division case of In Re Costino, Docket No. A-2761-09T4, the BME found that Dr. Costino's prescribing of Percocet to an undercover agent amounted to gross negligence. The court held that the ALJ and the BME properly determined that Dr. Costino's actions warranted the revocation of his license for a minimum of five years.

As the New Jersey Chapter of the American College of Emergency Physicians has indicated, physicians "are not aggressive enough in the treatment of pain" and "physicians prescribe too many narcotics." As they say so well, "evidence is complex and at times contradictory." A physician charged with over-prescribing should not be presumed to have intentionally violated the law.

Last fall, the State Division of Consumer Affairs created the Pain Management Council to establish "voluntary guidelines … to provide pain management, while maintaining effective controls to prevent the diversion and abuse of prescription drugs." How these guidelines will change the standards of practice is unknown. What is known is that a physician charged with over-prescribing needs to mount a spirited defense.

Such a defense involves a nuanced analysis of the facts to determine whether there was "indiscriminate" prescribing. Most physicians prescribe CDS because it is necessary for the patient's "health and comfort" "after a traumatic event, like an injury or surgery, or to enable a patient to function day-to-day," according to Larry Downs, CEO of the Medical Society of New Jersey.

A physician's counsel must use an array of data to substantiate that a physician did not indiscriminately prescribe CDS. All of the evidence must be reviewed, including the physician's character and competence—not just the medical records. A multipronged defense is warranted; it must include the use of well-credentialed experts who can substantiate that there was medical necessity for the CDS and that the medical records are consistent with standards of practice. 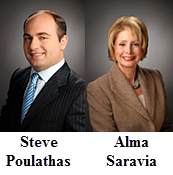 Saravia is a shareholder of Flaster Greenberg PC in Cherry Hill. She practices in the area of health-care law and was a member of the N.J. State Board of Medical Examiners. She can be reached at 856.661.2290 or alma.saravia@flastergreenberg.com.

Poulathas is a shareholder of the firm, and practices in the area of health-care law as well as concentrating in tax and business practice. He can be reached at 856.382.2255 or steve.poulathas@flastergreenberg.com.

Reprinted with permission from the February 23, 2015 issue of the New Jersey Law Journal. © 2015 ALM Media Properties, LLC. Further duplication without permission is prohibited. All rights reserved.